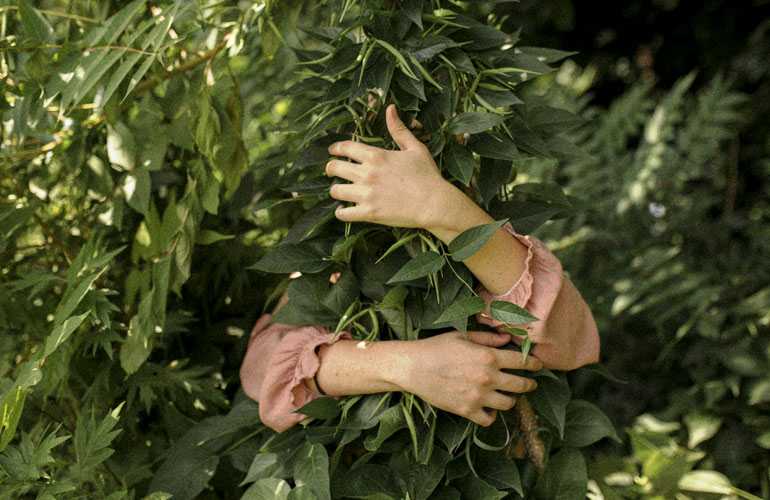 In the book Spiritual Ecology – the cry of the earth, Satish Kumar writes a chapter that really resonates with me. I’m going to go way out of my comfort zone and discuss it in a three-part mini series about the relationship between humans and nature, the divine and other humans.

In the Bhagavad Gita there’s a trinity in Sanskrit:

Kumar translates this into English as soil, soul and society. I noticed that this is also really close to the permaculture principles of earth care, people care and fair share. Both trinities give us a holistic view of the world and our place within it.

The ecology of soil

Everything comes from the soil and returns to the soil. The sun, the moon and the stars are all related to the soil. For me the soil is a metaphor for the entire natural system. If we take care of the soil, the soil will take care of us all.

When I lived so closely with the soil and all of its gifts in Nepal I began to see the world as one giant garden that provides us with everything we need. Everything, including humans, plays a role in its regeneration.

Kumar writes that in the past few centuries the sciences, technology, economics and philosophies have developed in such a way that we have elevated humankind to a ruling position with a higher status. This is the idea that nature (oceans, rivers, forests, animals) must not only serve our need but all of our desires and greed.

This has led to craziness in our culture that we’re barely even aware of – like flushing our toilet with water that’s clean enough to drink. In the grand scheme of things it really hasn’t taken us long to adopt this mindset that we are separate from nature.

Humans have only been here for a minute

Graham Burnett puts our time on this planet into perspective in his book Permaculture – a beginner’s guide. He notes that if the earth’s 4.5 billion year history was compressed into 30 days:

So we stopped taking care of our soil in that last second of our minute here on the earth and we’re kind of suffering for it. As Kumar states – nature is not just out there, we are nature too. What we do to nature, we do to ourselves.

Recognising the intrinsic value of all life – an earthworm, and insect, a blade of grass – is what Norwegian philosopher calls ‘deep ecology’. This requires us to recognise the rights of nature, in the same way we have rights as humans, and not just see it in terms of its usefulness to humans.

According to the principles of yagna we should celebrate the beauty, the abundance and the grandeur of nature by replenishing what we have taken.

Put simply, we should put back what we take and allow the land to re-new itself. This is why 2018 was a fallow year for the Glastonbury festival. It gave the land a chance to recover from the thousands of festival goers dancing around and enjoying the vibes.

Inspiration for the arts

Interestingly, an appreciation for the arts is discussed in the last section of Kumar’s explanation of yagna. He says that when nature is seen as an inanimate machine it becomes an object of exploitation, but if we see it as sacred it becomes a source of inspiration for the arts, culture, architecture and religion.

If there were no sunflowers, there would be no Van Gogh, and no Monet without lilies in the pond. Artists have always recognised the sacred quality of nature. Now it’s imperative that scientists, industrialists and politicians do the same and cease to think of nature as a mere resource for profit.

He goes on to say that “harmony is the most fundamental principle of ecology. We need to create a coherence between the sciences, the arts, and religions. This can be achieved through a deep sense of respect for soil, for the earth.”

I couldn’t agree with him more. Tune in next week for a deep-dive into tapas – the relationship between humans and the divine.

3 thoughts on “1. Yagna – the relationship between humans and nature”