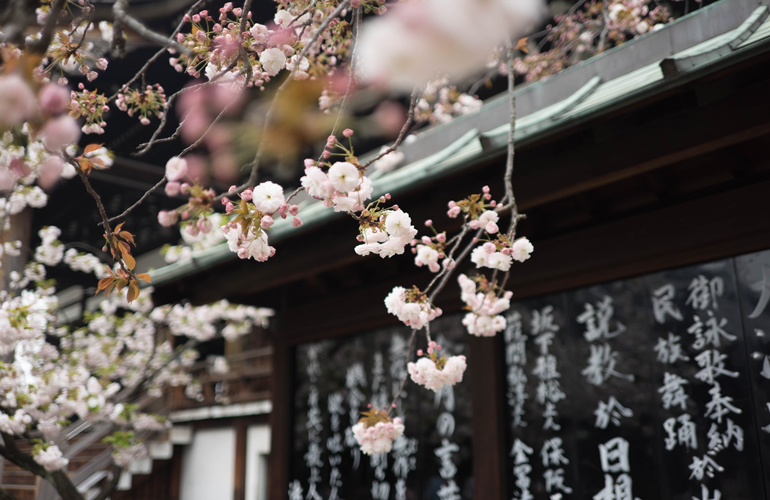 Japanese traditions, such as bonsai and cherry blossom festivals, highlight a deep respect for the gifts of nature. What does it all mean and how can we take part?

Buddhism and Shinto are Japan’s two major religions. They contribute to many of the practices in Japan and the deep respect for all living things.

2,500 years ago the Buddha searched for the meaning of life. After his Enlightenment – which was found by sitting under a pipal tree for 40 days – he saw the human race as a bed of lotus flowers. Some were still in the mud, some were just emerging from it, and some were at the point of blooming. All had the ability to unfold their potential.

Buddhists live life on the basis of certain truths – that nothing is permanent and everything in life is interconnected. Humanity is not seperate from the world it inhibits. This naturally leads to compassion for all things.

Shinto is as old as Japanese culture itself. At it’s core is the belief and worship of kami – the essence of spirit that can be present in all things. All life, natural phenomena, objects and human beings can be vessels for kami. This connection to, and respect for, all living things allows the two religions of Buddhism and Shinto to compliment each other.

In the Japanese language ‘Koi’ is a homophone for another word that means ‘affection’ or ‘love’.

‘Nishikigoi’ are known as the ‘the swimming jewel’. The nobles of Japan used to watch the colourful fish calmly come to the surface for their food. The relaxing and peaceful practice of watching the fish has become popular all over the world. Koi are now becoming a universal symbol of peace.

Ikebana is a 500 year old practice in the art of flower arrangement. It can be traced back to the Ashigaki period, along with the ancient tradition of tea ceremony.

Ikebana is not only an art form but a way of meditating on the change of seasons and time. Even the most fearsome Japanese samurais were said to have practiced it as a relaxing hobby.

Japanese rock gardens are also known as dry landscapes or Zen gardens. They use sand and rocks to design a simple garden that allows the viewer to clear their mind and be in a meditative state.

They became popular with the rise of Zen philosophy, a practice admired by samurais because of it’s dedication to focus and self control. Water is represented in carefully raked sand and purposefully arranged rocks symbolise mountains, trees and animals.

What can you try at home?

Bonsai is a small plant, usually a tree or shrub, grown in a container and pruned in a way that makes it look like a mature tree. It’s a 2000 year old practice where the ‘designer’ aims to unlock the essence of the tree.

Developing an understanding of the air, water, soil, sun, nutrients and temperature needed over time will heighten your awareness that there is no replacement for time – it is always constant and moving forward.

Hanami means ‘flower viewing’ and is one of Japan’s most ancient festivals. The court elites of the eighth and ninth century held blossom viewing festivals in their gardens, where aristocrats recited poetry and took pleasure in their beauty.

It gradually spread from the courts, to the samurai, to everyone. In Japan you’ll see parks filled with people in the brief but breath-taking cherry blossom season at the start of Spring.

Why not celebrate your own garden’s beauty and hold a flower viewing afternoon with a picnic and friends?